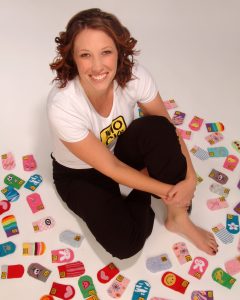 It was in March 2004 that I started LaRoo and launched the brand Mocks. Mocks mobile phone socks, an essential fashion accessory; designed to protect small electronic devices from scratches, sunburn or the cold.

Starting Mocks was my first proper foray into business, I threw around a few other ideas before deciding on Mocks, but it was the one I liked best and so it stuck.

It wasn’t all easy creating Mocks, since there were no other products the same when Mocks launched, so there was a lot of education with consumers.  Within 4 years Mocks had become the generic name for phone socks – with around 73% brand awareness with teens in Australia – a massive accomplishment – looking back!

Mocks were sold in 2500 stores in Australia at their peak and over 2000 stores in the UK, and were picked up by USA department stores before the GFC hit and they decided not to take on an untested products.

Today over 1.6 million Mocks have been sold worldwide in Australia, New Zealand, UK, USA and more.  No I didn’t walk away from Mocks a millionaire, and no I didn’t sell the brand – that is a whole other story.  Suffice to say that the market started to decline in 2009 partly due to our UK distributor ripping me off, the change in mobiles (eg iPhone) and partly due to the GFC which once I realised I tried to turn it around.  However I had had a good 5 years, and in 2010 I started Social Rabbit as a way to help offset the Mocks decline.

Unfortunately Mocks are no longer sold, but I learnt so much doing this business, importing, exporting, marketing, designing, wholesale selling, direct to customer sales, managing a team and more.